Meet the Stay Woke Mitts. This design was my contribution to Join Hands, an ebook collaboration with seven other designer friends of mine to benefit the ACLU and the SPLC. 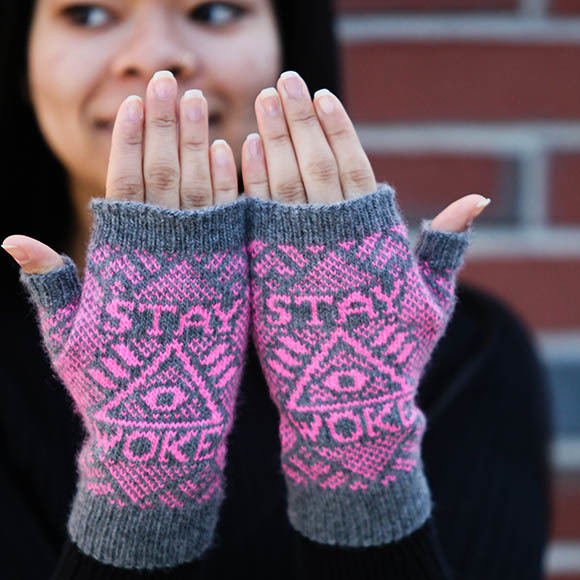 All proceeds from the ebook will be split evenly between the two charities. So far we've raised over $2K! I can hardly believe it. Check out Emma Welford's Instagram where she is also auctioning Leigh Miller's sample for her “Love More" mittens from the ebook, as an additional part of this fundraiser. 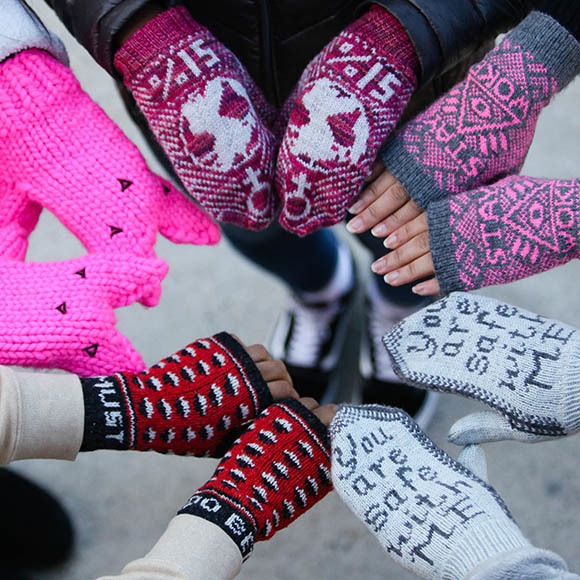 I was inspired to design these mittens after some very upsetting political events that happened earlier this year. I was especially dismayed by the travel ban which put some close friends of mine in a heartbreaking position. Rather than feeling helpless, I decided to take action using my only super power, knitwear design!

Complacency is the enemy of progress; the words and symbols knitted into these mitts serve as reminders of this profound message. The phrase “stay woke" has become a rally cry for the social justice-minded, and particularly for matters of racial injustice. We must keep our eyes open, and stay focused on the issues that are important. The pyramid symbol depicted on the mitts is called the “all-seeing eye of providence", and in this context also represents the importance of maintaining awareness —seeing the hidden, being aware of the whole story. This symbol has been associated with the United States seal since 1776, and connects this modern message to the core issues this country has been wrestling with since it was formed. Meditate on this message as you knit these mitts, and let them inspire you to make a difference.

popular posts
​Introducing Kuffel
Meet my latest design— Kuffel, a wonderfully cozy, effortless, swingy new pullover sweater pattern with all the knitterly details that a girl could...
Meet the Okeeffe Shawl
When I was a young girl growing up in Oklahoma, my parents loved to take me and my brother on road trips to New Mexico to visit Santa Fe or Taos....
Meet the Cabled Dad Mittens
I had pretty low expectations when I released my Cabled Dad Hat knitting pattern in 2014, but for four years it has remained one of my most popular...
Meet the Hilla Hat
Can an ordinary knitting project possibly be considered conceptual art? Well, maybe—meet the Hilla Hat from Homage: Knit Darling Book 2.Time for...